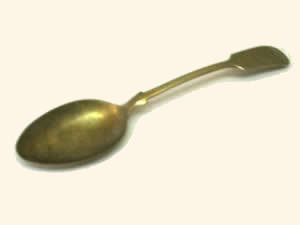 Spoon measurements are common in traditional recipes, as cooks have always had spoons to work with and could easily pass information in terms of the number of tablespoons or teaspoons of a particular ingredient as the spoon sizes didn't vary too much. This page covers spoon sizes in millilitres and fluid ounces, follow this link for teaspoon to tablespoon conversions.

Traditional UK tablespoons (see picture to the right) and teaspoons have a fairly deep bowl in comparison to modern spoons of similar bowl length and width, with the traditional tablespoon in the picture having been measured at 20ml whereas most modern tablespoons are closer to 15ml, which is the de facto standard tablespoon size used in recipes today (apart from in Australia where 20ml is used).

This means that you could be using 25% less of an ingredient if using a modern tablespoon to measure the ingredients for an older British recipe (see below).

Often recipes will specify a level tablespoon, heaped teaspoon or rounded teaspoon of a particular ingredient. It is fairly easy to remember what these mean as they are almost self explanatory.

The table below gives the equivalent in millilitres (ml) for tablespoons, dessertspoons and teaspoons (results are given to 2 decimal places).

The table below gives the equivalent in US fluid ounces (US fl oz) for tablespoons, dessertspoons and teaspoons (results are given to 2 decimal places).

The table below gives the equivalent in Imperial fluid ounces (UK fl oz) for tablespoons, dessertspoons and teaspoons (results are given to 2 decimal places).