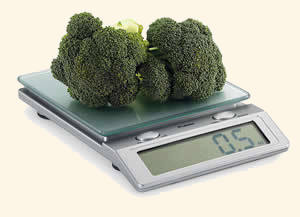 When cooking from a recipe ensuring that you have the right amount of each of your ingredients is one of the most important aspects of getting the recipe right and having a nice tasty dish to eat. Most recipes will specify the amount of each ingredient as a weight with European recipes generally being in kilograms and grams, American recipes using pounds and ounces and UK recipes being a mixture, some using weights in kilograms and grams and some using weights in pounds and ounces.

Pounds and ounces are imperial units of weight and are currently used in the United States, Great Britain, Ireland and other British Commonwealth countries. Although no longer the official units in Great Britain, Ireland and the Commonwealth countries their use is still widespread and many older recipe books, using these measurements, are still in use.

Kilograms and Grams are metric units of weight used in all European countries and most of the rest of the world. They are now the official units of weight in Great Britain, Ireland and British Commonwealth countries although their use is still not ubiquitous.

Most of the common ounce to gram conversions are given in the table below (results are rounded to the nearest gram).

Most of the common pound to kilogram conversions are given in the table below (results are rounded to 3 decimal places - the nearest gram).

Commonly used values for kilogram to pound conversions used in cooking are given in the table below (results are rounded to one decimal place).